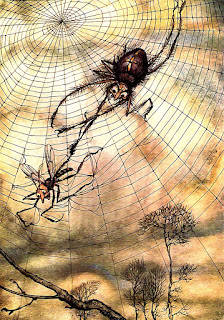 Most of us already have access to great volumes of knowledge about business. How to start one, how to avoid pitfalls, work smarter, etc. But what do we know about ages’ old wisdom concerning work itself?We put together a list of work fables from the volumes of material credited to Aesop. This Greek storyteller succinctly captured what it is we know and think about work; how we try to escape it or embrace it.


Too clever to work

The Salt Merchant and His Ass. An ass carrying a load of salt accidentally falls in a stream and realizes that his load has melted away. So the next time he crosses the steam, he purposely falls down. Then his owner loads him with sponges, so when he falls down a third time, the weight of his load doubles instead of disappearing.


When to ask for help

The Lark and Her Young Ones. A young lark overhears a farmer announcing that the crop is ripe and it's time to ask his friends to come help with the harvest. The lark asks its mother whether they need to move elsewhere for safety. She responds that if the farmer is only asking his friends, he isn't serious about getting the work done. They won't have to move until the farmer decides to harvest the crop himself.

Th520 B.  from the jaws of a wolf ought to be compensation enough.
About Aesop: He was born a slave around 620 BC and earned his freedom from his second master after working hard to become learned. Following that he joined the renowned ranks of other philosophers, such as Epictetus and traveled to many countries where he learned a great deal about human affairs as the above work fables suggest.

Aesop's Fables
Whole Self Into Work